Consisting of many underground tunnels with the total length of more than 200km, Cu Chi Tunnels are known nationwide as the base where the Vietnamese planned their operations of the Tet Offensive in 1968. Today, parts of the tunnel have been modified to serve visitors in Vietnam travel. Coming there, visitors can understand more about the prolonged resistance war of the Vietnamese people and also of the persistent and clever character of the Vietnamese nation. Cu Chi Tunnels are located approximately 70km northwest of Ho Chi Minh City centre in Cu Chi Rural District. They consist of more than 200km of underground tunnels. The main axis system has many branches connecting to underground hideouts, shelters, and entrances to other tunnels.

Cu Chi District is known nationwide as the base where the Vietnamese mounted their operations of the Tet Offensive in 1968.The tunnels are between 0.5 to 1m wide, just enough space for a person to walk along by bending or dragging. However, parts of the tunnels have been modified to accommodate visitors. The upper soil layer is between 3 to 4m thick and can support the weight of a 50-ton tank and the damage of light cannons and bombs. The underground network provided sleeping quarters, meeting rooms, hospitals, and other social rooms. Visiting the Cu Chi Tunnels, tourists joining tours in Vietnam are provided with a better understanding of the prolonged resistance war of the Vietnamese people and also of the persistent and clever character of the Vietnamese nation.

For a place that's physically invisible, the Cu Chi Tunnels have sure carved themselves a celebrated niche in the history of guerilla warfare. Its celebrated and unseen geography straddles "all of it underground" something which the Americans eventually found as much to their embarrassment as to their detriment. They were dug, before the American War, in the late 1940s, as a peasant-army response to a more mobile and ruthless French occupation. The plan was simple: take the resistance briefly to the enemy and then, literally, vanish.

First the French, then the Americans were baffled as to where they melted to, presuming, that it was somewhere under cover of the night in the Cuu Long (Mekong) Delta. But the answer lay in the sprawling city under their feet - miles and miles of tunnels. In the gap between French occupation and the arrival of the Americans the tunnels fell largely into disrepair, but the area's thick natural earth kept them intact and maintained by nature. In turn it became not just a place of hasty retreat or of refuge, but, in the words of one military historian, "an underground land of steel, home to the depth of hatred and the incommutability of the people." It became, against the Americans and under their noses, a resistance base and the headquarters of the southern Vietnam Liberation Forces. The linked threat from the Viet Cong - the armed forces of the National Liberation Front of South Vietnam - against the southern city forced the unwitting Americans to select Cu Chi as the best site for a massive supply base - smack on top of the then 25-year old tunnel network. Even sporadic and American's grudgingly had to later admit, daring attacks on the new base, failed for months to indicate where the attackers were coming from and, importantly, where they were retreating to. It was only when captives and defectors talked that it became slightly more clear. 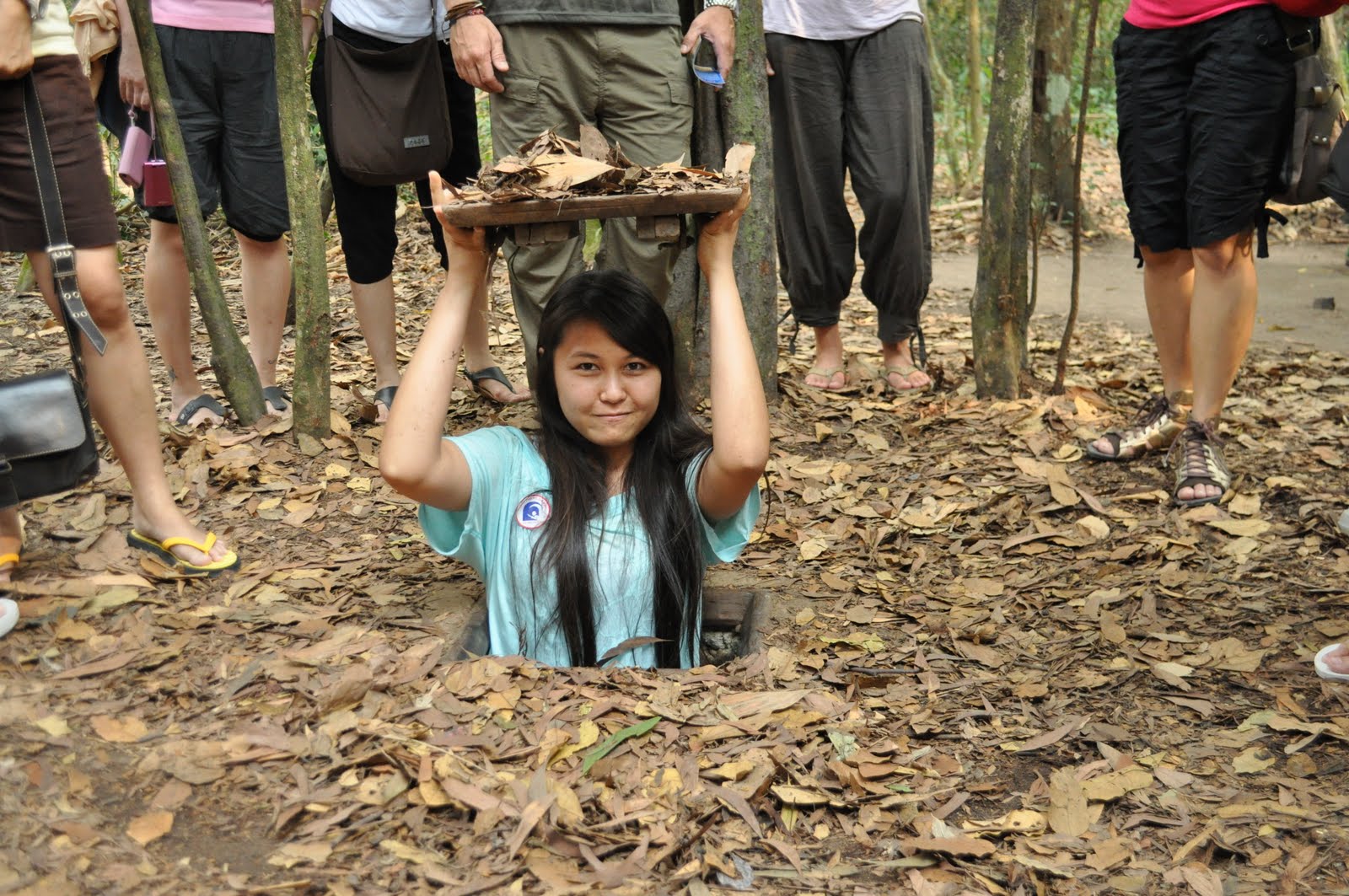 But still the entries, exits, and even the sheer scale of the tunnels weren't even guessed at. Chemicals, smoke-outs, razing by fire, and bulldozing of whole areas, pinpointed only a few of the well-hidden tunnels and their entrances. The emergence of the Tunnel Rats, a detachment of southern Vietnamese working with Americans small enough to fit in the tunnels, could only guess at the sheer scale of Cu Chi. By the time peace had come, little of the complex, and its infrastructure of schools, dormitories, hospitals, and miles of tunnels, had been uncovered. Now, in peace, only some of it is uncovered as a much-visited part of the southern tourist trail. Many of the tunnels are expanded replicas, to avoid any claustrophobia they would induce in tourists. The wells that provided the vital drinking water are still active, producing clear and clean water to the three-tiered system of tunnels that sustained life. A detailed map is almost impossible, for security reasons if nothing else: an innate sense of direction guided the tunnellers and those who lived in them.

Some routes linked to local rivers, including the Saigon River, their top soil firm enough to take construction and the movement of heavy machinery by American tanks, the middle tier from mortar attacks, and the lower, 8-10m down was impregnable. A series of hidden, and sometimes booby-trapped, doors connected the routes, down through a system of narrow, often unlit and invented tunnels. At one point American troops brought in a well-trained squad of 3000 sniffer dogs, but the German Shepherds were too bulky to navigate the courses. One legend has it that the dogs were deterred by Vietnamese using American soap to throw them off their scent, but more usually pepper and chilly spray was laid at entrances, often hidden in mounds disguised as molehills, to throw them off. But the Americans were never passive about the tunnels, despite being unaware of their sheer complexity. Large-scale raiding operations used tanks, artillery and air raids, water was pumped through known tunnels, and engineers laid toxic gas. But one American commander's report at the time said: "It's impossible to destroy the tunnels because they are too deep and extremely tortuous."

Today the halls that showed propagandas films, housed educational meetings and schooled Vietnamese in warfare are largely intact. So too are the kitchens where visitors in Vietnam tourism can dine on steamed manioc, pressed rice with sesame and salt, a popular meal during the war, as they are assailed with true stories of how life went on as near-normal, much of the time. Ancestors were worshipped there, teaching was well-timetabled, poultry was raised and even couples trusted, fell in love, were wed, and honeymooned there. But visitors have it easier: those re-constructed tunnels give the flavour of the tunnels but not the claustrophobia and the sacrifice of the estimated 18,000 who served their silent and unseen war there with only around one-third surviving, the rest casualties of American assaults, snakes, rats and insects.

Now the unseen and undeclared No Man's Land is undergoing a revival, saluted as a Relic of National History and Culture with its Halls of Tradition displaying pictures and exhibits. The nearby Ben Duoc-Cu Chi War Memorial, where the reproduced tunnels have been built, stands as an-above ground salute to a hidden war.

If you are in or planning to Ho Chi Minh City, you should visit Cu Chi Tunnels where you can be provided with better understanding of Vietnam during the War as well as persistent and clever character of Vietnamese nation.